Opening a Denny's Franchise in the UK 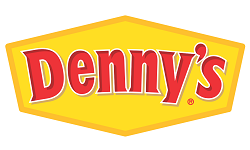 Denny's franchise is now in the UK. The food franchise famous for its American Diner theme is looking to expand the iconic brand to towns and cities across the UK.

Denny's was established in 1953 as a humble donut stand. Over 65 years later, the brand has developed into an international restaurant chain with over 1700 stores, the majority of which are franchise-owned.

It still serves the same purpose, to provide good food anytime of the day. So, if you fancy a burger for breakfast or pancakes for dinner, you can at a Denny's diner restaurant.