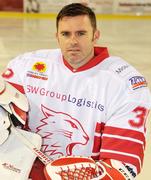 Stevie Lyle, dad of 2 boys and a 3rd due soon, is literally one in a million representing Wales and GB for over 23 years at the highest level of Ice Hockey - a sport not for the faint hearted! HOLDING 83 CAPS FOR GREAT BRITAIN, he is the most capped Ice Hockey player the country has ever had and aged 17 he became the Junior Welsh Sports Personality of the Year too. Stevie is now the Driving Miss Daisy franchisee for Cardiff.

Franchising in Wales, why buy a franchise in Wales?

Franchising in Wales is valued at ÃÂ£0.4 billion and is an important aspect of the Welsh economy. 39% of all franchise systems are present in Wales.

Wales is a country steeped in history and culture, with a traditional strong work ethic. Today Wales boasts a population of 2.94 million, mainly concentrated around its major cities of Cardiff, Newport, Swansea and Wrexham and mining valleys of the south east of the country. Cardiff, Wales' capital city and one of the UK's primary cosmopolitan cities, boasts a population of 0.31 million.

View all resales in Wales
Top