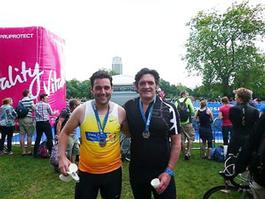 As part of Joe’s training regime he cycled and ran around Enfield and then built up cardio fitness by swimming in the men’s pond on Hampstead Heath in preparation for this challenging event, the PruHealth ITU World Triathlon in Hyde Park.

The triathlon involved a 750m swim in the Serpentine, a 22.5km bike ride and a 5km run. Competing alongside him was Joe’s son Mike; the pair spurred each other on as they motored through each part of the challenge. Meanwhile Caremark (Barnet & Enfield)’s Managing Director Anna Wilson supported the dynamic duo from the sidelines, cheering them on as they went through each phase of the triathlon.

Joe completed the event in a very respectable 1h 39 minutes and raised over £300 for Marie Curie Cancer Care.

When not raising money for charity, Joe is a joint director of Caremark (Barnet & Enfield) a Greater London home care provider, delivering care and support services to people of all ages, abilities and ethnicities in the Boroughs of Barnet and Enfield.

As a community based business, Caremark (Barnet & Enfield) have links with charities and organisations such as Marie Curie Cancer Care as well as others in their locality and are able to offer support not only through working partnerships, but also through fund raising events such as the Triathlon.

Read more on a Caremark Franchise