Leaving the military and looking to the future 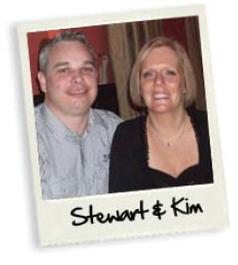 Kim and Stewart Bisley are based in Glasgow. Stewart is a Chief Petty Office in the Navy and is a submariner. He currently spends months away at a time, but has just under 2 years left in the Navy so the couple were keen to find a business that they could develop and work in together once he had left the Navy.

Kim has a sales background and has been busy developing the business, together with some additional help, whilst Stewart is away. They have a young daughter Maia and so are looking at a future which would enable them to maximise their family-time and support them financially whilst avoiding either Stewart or Kim having to work in an office or deal with long commutes. Kim also feels that her sales background and people skills will help them grow the business.

Kim said that they chose franchising as ‘buying a business felt safer with a franchise. You are buying into an existing business model’. She also added ‘I liked the idea of a head office cushion. We could run it ourselves but have the support and training of a bigger company’.

Kim and Stewart did a lot of background work before they decided upon Snack in the Box. They investigated different franchise companies by looking on the internet, visiting a couple of exhibitions and subscribing to the Franchise Magazine.

Ultimately, they chose Snack in the Box as they felt it was recession-proof. ‘We liked the idea of this business because although we are in a recession, everyone needs a little pick-me-up bar of chocolate or a feel-great treat’.

Kim also added, ‘We liked Snack in the Box from day one of our enquiry. We found them really helpful and I liked the products’.

Kim and Stewart cover a large area and ‘no two weeks are the same’. They have a mixture of Slimline machines and a handful of Combination machines. Their customers include shopping centres, distribution centres, nurseries and care homes. While Stewart is still away, they have part time help servicing their customers. Their plan is that once Stewart leaves the Navy, they will be able to spend more time canvassing for new customers and really growing their territory. Kim meanwhile also deals with orders, reports, taking deliveries and any other customer issues and has also been busy putting in a tender to provide a vending service to a large local customer.

Kim admits she has found it a very exciting time. Although, she first found the thought of canvassing for new customers to grow their territory a little daunting but she went on a sales training day organised by Snack in the Box and found it ‘invaluable’. It also enabled her to meet other franchisees near her. ‘For me, the best part was going out myself and getting a machine sited with a new customer - it was a great boost for me!’