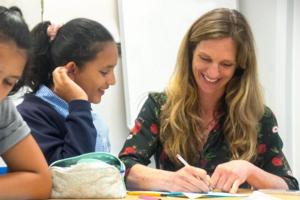 First Class Learning (FCL), one of the UK’s largest tuition franchises, is rapidly expanding in Scotland, and has recently opened tuition centres in Edinburgh, Aberdeen, Dundee and Glasgow.

The tuition business, which specialises in maths and English programmes, has just experienced its busiest January ever. With the end of the pandemic hopefully in sight, concerned parents are now seemingly determined to help their children catch up on all the education they have missed over the last two years.

FCL, which has over 300 franchises throughout the UK, has now expanded throughout Scotland, with its Aberdeen and Edinburgh tuition centres opening in 2020. Further centres have now opened this month in both Dundee and Glasgow, as demand for out of school education continues to grow.

Ed Hyslop, FCL’s CEO said: “We have seen real growth in Scotland recently, and this is just further evidence that out of school tuition is in very high demand. Our Aberdeen franchisee is doing fantastically well and has just expanded by opening a second centre in the city. Edinburgh is also doing very well and is pretty much full to capacity, so they are also looking to expand in the months ahead. We also have brand new franchisees in Dundee and in Glasgow, both of which have launched this month, so it is a very exciting time for us north of the border. In general, this has been the busiest January we have ever experienced. We have received a record number of enquiries from parents who know their children need extra support to make up for the disruption to their learning.”

Husband and wife team Gayle (48) and Grant Jones (50) are celebrating two years as owners of the FCL Edinburgh branch. They run four classes a week with upwards of 300 students.  Their goal is to grow this to 400 by May next year, with the help of a full-time receptionist and 20 part-time teaching assistants.  The business operates from a dedicated teaching centre in the outskirts of Edinburgh.

Gayle explains: “Helping children realise their full potential is very satisfying.  It has been a tough two years for children with the pandemic.  We are finding that many of our students are behind in their studies through no fault of their own.  We are hopefully doing our part in a small way to help them catch up.  The support from FCL has been brilliant.  Whatever we need they have been there to help.  We could not have achieved what we have on our own.  FCL has an established brand and their teaching materials are second to none.”

FCL is a franchise tuition business that focuses on building the skills and confidence of its students. This is achieved by taking a personalised approach to children’s learning using the highly regarded maths and English programmes, which are created by the in-house team of qualified education specialists. FCL works with children and their parents to ensure that it is the best fit for them – and, of course, the same goes for prospective franchisees. Core to FCL’s success is investment in people, which puts children at the heart of everything it does.