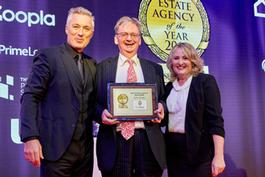 It was celebrations all round for EweMove at this year’s Times/Sunday Times Estate Agency of the Year Awards as the firm scooped four top honours, including Gold for Best Estate Agency Franchise.

EweMove Sales & Lettings, the UK’s first hybrid estate agency which launched in 2014, was praised by the judges for offering its franchisees a ‘fantastic proposition’ and for its ‘highest level of personal service… supported by a fantastic brand’ at the official ceremony at the Hilton London Metropole on 2nd December.

Dubbed the ‘Oscars’ of the industry, the Estate Agency of the Year awards, in association with the Times and Sunday Times, is the UK’s longest running and most respected awards event which celebrates and rewards best practice across the whole sector.

In addition to Best Franchise Estate Agency, EweMove also secured Gold for Best Website, as well as Silver for both Best Innovation and Best Agency to Work For.

Glenn Ackroyd, Co-Founder and Head Shepherd of EweMove, said: “To scoop two gold awards including one for estate agency franchise is absolutely amazing, particularly in what is such a competitive and sought-after category. As a property franchise agency, we’re hugely passionate about ensuring that everything we do makes for the ultimate customer experience, as well as in fully supporting our network of franchisees to be the very best they can be.

“This has been a truly phenomenal year for us, with a growing collection of industry awards including those within the lettings franchise sector – and these latest accolades are the absolute cherry on the top of the cake. We’re thrilled that our commitment to innovation, our team, and our customers, has been acknowledged and recognised by the judging panel in this way and we’d like to thank everyone involved in helping us achieve such outstanding success.”

EweMove, part of the Property Franchise Group family, is the UK’s most trusted sales and lettings agent based on independent reviews through Trustpilot. The country’s first ever hybrid agency, it was launched by Glenn Ackroyd and David Laycock in 2014 and manages and sells thousands of properties across the length and breadth of the country. EweMove prides itself on providing exceptional customer service through its network of experienced local property agents on the ground, all supported by a national operations centre and cutting-edge technology.