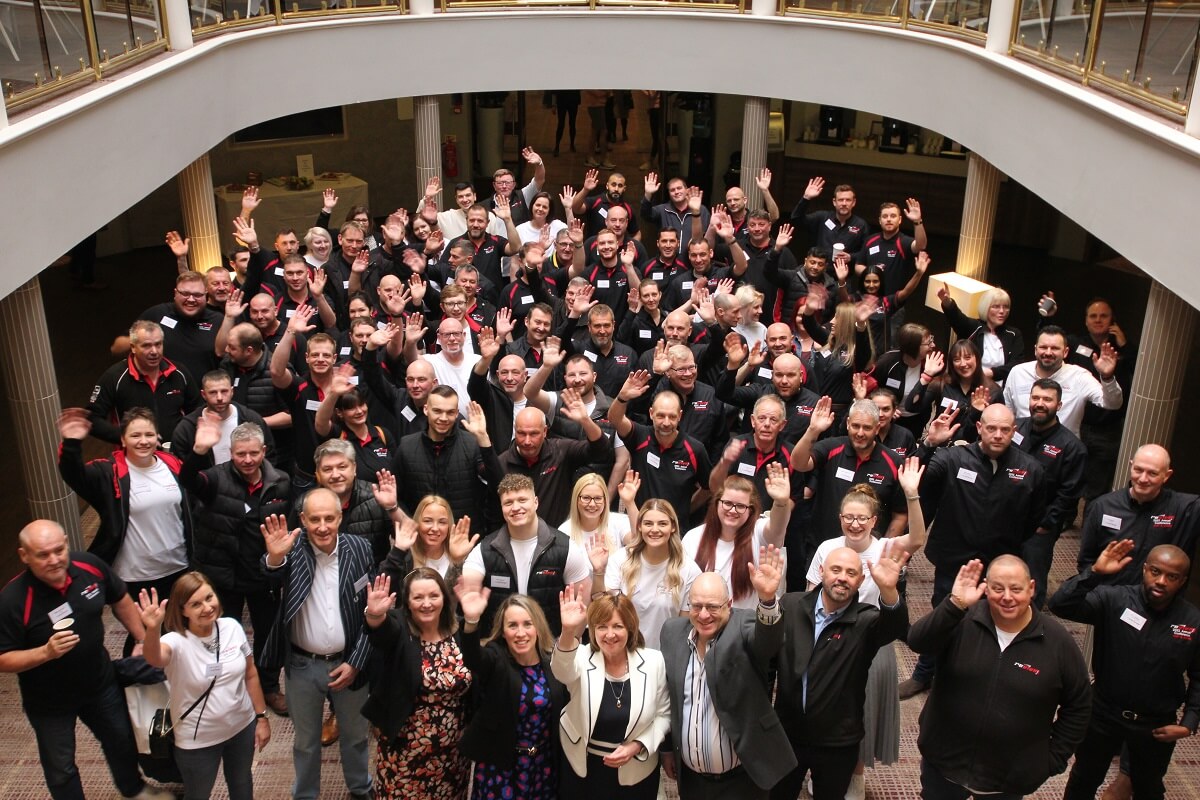 It’s been two years since Revive! Auto Innovations franchisees and head office staff have been able to get together face to face. The joy of being able to re-unite at the Jury’s Inn Hinkley Island Hotel added even more energy to the conference’s packed schedule of presentations and guest speakers which was rounded off by a gala dinner awards evening.

Revive! managing director operations and finance, Terry Mullen opened the 2022 Revive! annual conference with a feisty speech about the power of franchising.

She said: “A few months ago TV Dragon Peter Jones caused outrage in the franchising industry by saying ‘Franchises never make any money’.  He was giving advice to a firm that wanted to grow their brand and felt franchising would be their best option.  It’s not the first time one of the Dragons has made comments like this and although I tip my hat to his vast knowledge of business, Peter Jones really needs to look again.

“There are thousands of businesses right across the UK operating under a franchise banner and some massive success stories such as McDonalds, Subway and several Home Care brands.  Although Revive! hasn’t yet reached the turnover of the likes of McDonalds we do find ourselves mentioned in the same circles when franchisors are recognised in industry awards.

“Franchising is very much the right model for fast growing and ambitious companies and provides leverage that stand alone businesses can sometimes struggle with.

I believe that we have got the right mix of a relatively small network of multi-unit franchise owners supported by a successful and fast-growing company owned operation.  Franchising very much works for us.”

Over 100 franchisees and their teams attended the event to hear how Revive! rose to the numerous challenges presented by the pandemic and to celebrate both the network’s on-going collaborative success and the individual achievements of star performers within it. The conference also gave franchisees the opportunity to network with each other and head office staff as well as meet key suppliers.

By tradition, managing director sales and marketing Mark Lewellyn shares a trailer from a new superhero movie at the start of the directors welcome address, and 2022 was no exception. Marvel was the choice this year, perhaps fittingly, as despite everything, Revive! has had a marvellous year.

He said: “ As each year goes by, I never fail to be amazed by the dedication and commitment of the group of people I am proud to call the Revive! family.  Because that’s what we are.   Like any family we look out for each other, show acts of kindness and want to build a better future for the next generations. As our network grows and we welcome new franchisees to Revive! the family just gets bigger, but the core values that bind us together of of Integrity, Outstanding Customer Service, Technical Excellence and Unity together remain the same.  There’s some big challenges ahead of us, but also some tremendous opportunities as we continue to demonstrate the power of team work  here at Revive!”

Delegates heard that over 30% of the network achieved their best ever sales year in 2021 with Revive! Surrey and Revive! East Anglia exceeding £1mn turnover. A total of 16 franchisees reported record sales months and special mention was given to Revive! owners in Shropshire, York, West Lincs and Bromley for their long service, together totaling 50 years!

As lockdown changed the car market out of all recognition, Revive!’s in house IT team was able to rapidly develop and launch bespoke online booking portals and a repair gateway to enable dealerships and insurance policy holders to access SMART repair and alloy wheel services.  New partnerships were forged with relative newcomers including car ‘supermarkets’ and direct sales platforms  who wanted to access Revive!’s mobile repairer network.

Franchise director Cathryn Hayes asked the conference to give a warm welcome to new owners recruited in 2021. She said: “After the challenging times in 2020 it was great to be able to get ten new Revive! franchisees launching their businesses in 2021, adding to the fleet of Revive! vans all over the UK, in Northern Ireland, Scotland, Wales and England.”

She went on to outline some of the franchise’s major achievements over the past 12 months. “For the fifth year in a row, we have been ranked in the top 25 of the Elite Franchise Top 100 franchises, a league table in which we’ve had a constant presence.

“Last year we entered the Brilliant Business Awards, a nationwide awards programme open to all businesses not just the franchise sector. This is the first time we have entered so were delighted to win Silver in the Customer Service category, a reflection of our Outstanding Customer Service values.

“We were reaccredited for our full membership status of the British Franchise Association during the year, with a full review of our achievements and processes and passed with flying colours.

“Our very own joint MD Terry was a finalist in the Bodyshop Excellence Awards as well as being named as one of the top Bodyshop industry influencers by the ABP Club, great recognition for Terry’s work in our sector.

“And we were delighted to be awarded the Workbuzz 5 Star Franchisee Satisfaction award on our first attempt. This is an independent survey of our franchisees, asking a number of questions before scoring us on 5 key areas, Training and Support, the Franchise System, Culture and Relationships, Leadership and Overall Satisfaction and whether you would recommend Revive!

“We achieved an overall score of 85% which is fantastic, putting us straight into the top tier.”

After the coffee break, Revive! Sponsored racing car driver and reigning Mini Miglia champion Andrew Jordan took part in a question and answer session and updated delegates on his plans for the 2022/3 season.

Keynote speaker Olympic gold medallist Iwan Thomas rounded off the day. In a moving and inspirational presentation, he spoke about the challenges he faced taking part in the gruelling Centurion Track 100-mile event to raise awareness of the need for women to take a test to see if they are carrying Group B Streptococcus infection (more commonly known as Strep B).  A cause close to heart after his newborn son Teddy became desperately ill from the bacteria.

In the evening, the gala awards dinner recognised the standout franchisees of 2021. Jay Belam, owner of Revive! Surrey was named Franchisee of the Year, with Iain Wallis of Northampton taking silver and Scott Gosbell of Stoke on Trent awarded bronze. Jay also scooped the Retail Award with silver going to Steve Thatcher of Portsmouth and bronze to Mike Haselden owner of Revive! Chester.

Each year the network itself votes for the Players Player of the Year Award which recognises the ongoing support given by an individual franchisee to his network colleagues. This year the award went to Paul Morris owner of Revive! Birmingham North.

No Revive! conference awards dinner would be complete without the traditional fundraising charity game.  To date Revive! has raised almost £7,700 for the Motor Neurone Disease Association in memory of Terry Mullens’ brother who sadly lost his life to the disease. Proceeds from the 2022 annual conference will also be shared with British Red Cross Ukrainian Crisis Appeal.