Rescued from kennels, to become the centre of a loving family...and their community 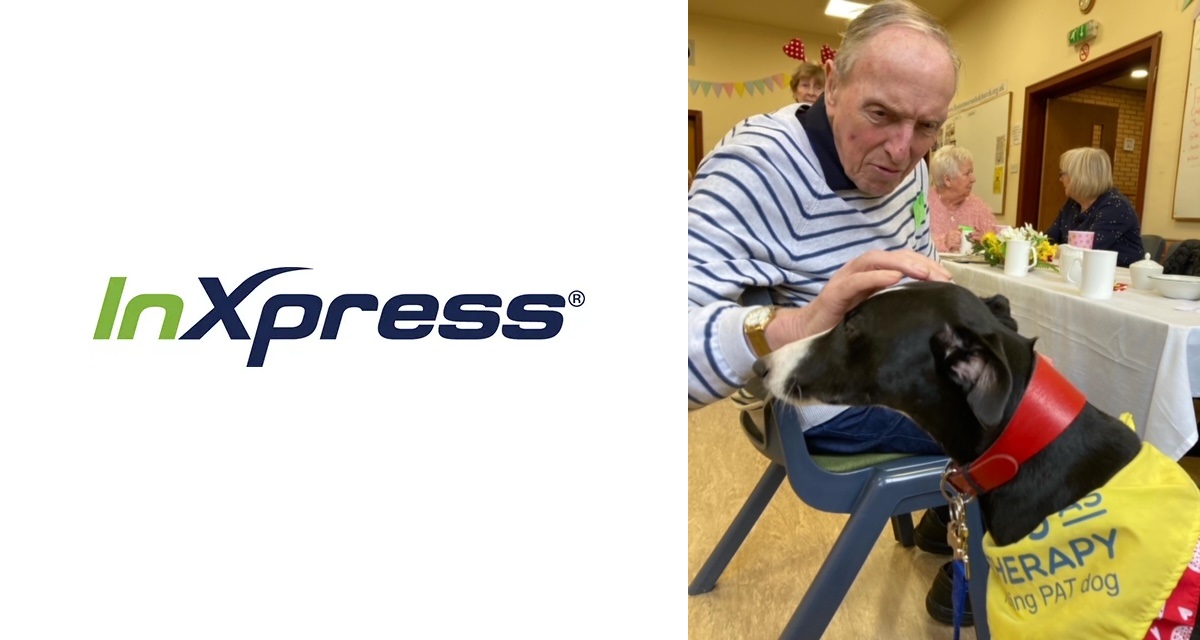 If you’re a pet owner, you’ll understand the simple pleasure to be found by just having a moment with your fur-baby, when you’re feeling stressed, anxious or overwhelmed. This is why for InXpress Manchester South’s Mike Toal, and his partner, Vanessa Heaps, who works with him in the business, the joy of being able to share important therapeutic moments like these, is an important way to give back.

Two and half years ago, Mike and Vanessa’s daughter, Mia, wanted a dog. Not just any dog. One which would allow her to help other children, in the same way someone else’s dog had helped her. “A few years ago, Mia had been in hospital, and someone brought their pug onto the ward. Alfie was a Pets As Therapy dog. He’d been trained to be with the children in recovery on the ward, so was both really calming and comforting to them. Seeing the positive impact it had for Mia at the time, we wanted to be able to do this as a family. Originally, we wanted a whippet, but decided to upsize, and ended-up adopting a greyhound. Sadly, there are loads of them, because they’re given away when they finish racing. Mia fell in love with Ellie. She’s one of the lucky ones.”

A good therapy animal has a mild temperament to not just be around children, but around vulnerable adults, too. “Even though Ellie was a rescue dog, having been bred for racing, and retired after a year because she had a problem with one of her back legs, she is the calmest, sweetest, laziest, greyhound you could meet! Before joining our family, Ellie had been a working dog. She’d never lived in a house – only kennels, or spent much time around people. But, having been enveloped by my two teenagers, Ellie’s personality has literally unfolded before our eyes. She absolutely loves people – especially when they’re lavishing love and attention upon her.”

As a Pets As Therapy dog, part of the scheme Vanessa and Ellie are involved in, is Read2Dogs. They work with a school, who identify children who would benefit most from being around Ellie. “There’s one seven year old boy who is on the autism spectrum. His reading is phenomenal. When Ellie first started, he would sit in the furthest chair away from her. Just weeks later, and he was cuddled right up to her, reading his book. Last week he shared his toy dragon with her – so cute. There’s also a little girl who’s been having panic attacks ever since the pandemic; Ellie helps her to calm down. We’re based in the school’s resource centre, so if a child is having a difficult moment, even though they aren’t on our reading list, they can come to see Ellie, and she offers them a calming space.”

As well as working with the school, Ellie recently started attending a Dementia Friends café. “My mother-in-law actually volunteered us to go! The regular therapy dog was moving. At first I wasn’t sure how Ellie would respond, but she loves it! She loves being the centre of affection! The first time I took her, someone was playing old songs on the piano. Everyone was singing and dancing. Ellie didn’t want to be left out, so she gate-crashed and started joining-in! It was a joy to watch.”

When she isn’t out with Ellie, visiting people who are feeling comforted, Vanessa works alongside her husband, Mike, at InXpress Manchester South. “I actually work in Sales,” Vanessa says. “But, it’s such an honour for us as a family to be in a position to give back in our local community, in such a practical way. And, it’s not just on a local level. As a franchise network, InXpress are also incredibly supportive, as a whole. At the beginning of the year, the InXpress Gives Back committee donated £500 to Pets As Therapy. I’m very lucky to work with such a supportive company,”

Matthew Robinson, National Volunteer & Events Manager for Pets As Therapy says, “The donation from InXpress means so much. Animal therapy is an effective, and often immediate, way to help people. Especially when you see how our volunteer pets help to allay fears and reduce stress; like when a child faces surgery – doctors can use the therapy animal to show what will happen. We’ve also found, in working with people living with dementia, our pets can help draw out long-forgotten memories. Having grown-up with dogs, I understand how beneficial they are, personally. Dogs don’t judge – they love and accept us for who we are. To be able to offer this therapeutic support to others, is so important. Thank you, InXpress”