Revive! up for Highest Industry Award 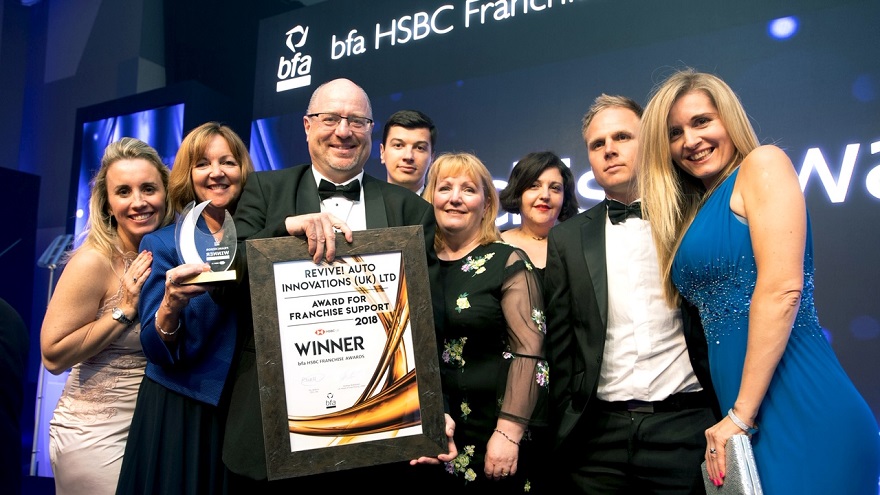 After months of having to ‘sit’ on the exciting news that the UK’s leading SMART repair network  had been shortlisted for the bfa HSBC Franchisor of the Year award, Revive! is delighted to announce that it is one of just six brands singled out to take the top accolade in this year’s British Franchise Awards.

Although Revive! directors heard they had made the list of finalists earlier this year, the shortlisted candidate interviews and awards dinner had to be postponed following the outbreak of Covid-19. Judging will soon be underway and the winner will be announced at the re-scheduled gala event in November.

Over the past twelve months Revive! has gone from strength to strength,  evolving its business model from the traditional ‘man in a van’ to a become a management franchise opportunity.  Offering unrivalled support, a healthy pipeline of national account work and a clear path to growth, Revive! attracted unprecedented interest from candidates. During 2019 the franchise  signed up two new franchisees each starting their businesses with two vans and completed its largest resale to date, bringing in a new franchisee to take on the thriving 10-van business.

It is this continuing desire to strive for even higher standards in everything it does that led to the award shortlisting.

This news gives the Rugby headquartered franchise even more to celebrate.  Now staff are able to return to work they have been welcomed back into Revive!’s brand new offices, re-uniting teams previously working across two different buildings in the town.

Said Cathryn Hayes QFP, franchise director of Revive!: “ We are  of course delighted to be shortlisted for what is generally regarded to be the premier award in the UK franchising industry. We’ve always worked hard to provide the best possible support and mentoring for our franchisees and this year we have ramped it up even more. Our new management franchise opportunity offers an enhanced business growth programme and the latest version of the  Revive! ap which allows franchisees to manage their entire sales process from quotation through to job scheduling and then invoicing, all from a hand held tablet, designed and developed by our in-house IT department.

“The new business model has proved to be very attractive, its success measured by the vey high calibre franchisees we have recently recruited.

“Despite the unexpected Covid pandemic we are in a good place to reach our ambitious target of achieving a £40m turnover by the year 2025 and are already seeing our franchisees setting new sales records. We have supported franchises through the lockdown, providing advice on available government financial help schemes as well as making the necessary arrangements to help them furlough their staff.

“Achieving such recognition from the franchise industry is a real testament to our network and the head office team who work so hard to support them.  It’s been a tough time for us all during the lockdown so it’s great to have something to celebrate as we gradually begin to get back to work.

“As our business expanded we outgrew our original premises and have been renting additional space whilst we looked to acquire land and build our new offices which are a joy! There’s room for everyone with appropriate social distancing and as people return to work they are really enjoying being back together as one big team again.”

In congratulating Revive! Pip Wilkins QFP, CEO of the British Franchising Association said: “Transferring the franchise model from the traditional ‘man in a van’ type franchise to a management franchise has seen Revive! gain a significant rise in network turnover, and it also bucks the trend of the car industry being predominantly male, with a number of high performing franchisees being female.”

Andrew Brattesani, Head of Franchising, HSBC added: “As well as the shift in franchisee profile over time, Revive! also works tirelessly to support the network and invest in operations, training and mentoring to set the franchise network up to succeed.”

The bfa HSBC awards dinner will be held at the Vox, Birmingham on 30 November.