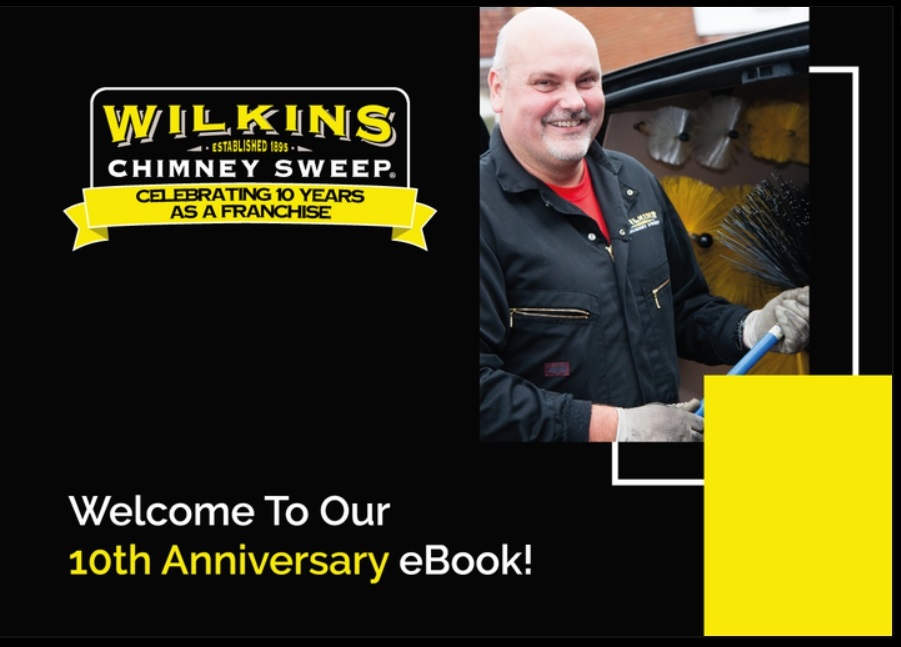 Wilkins Chimney Sweep is celebrating 10 years as a franchise operation by releasing a commemorative eBook. Full of photos, facts, figures and funny stories, the eBook has been designed to highlight the company’s journey to franchising success over the last 10 years. The eBook can be viewed here: https://www.franchisechimneysweep.co.uk/ebook

The only bfa chimney sweeping operation in the UK, Wilkins was founded in 1895 and franchised under the ownership of Louise and Peter Harris in 2011.  In 2018 Darren Taylor purchased the business, bringing it into the Taylor Made Franchising group alongside Stumpbusters, PVC Vendo, Thomas Cleaning Franchise and Iconic Window Cleaning.

Wilkins currently has 18 franchise owners covering 29 territories in 27 vans. In 2021 they hit record trading figures and received over 10,000 five-star reviews on TrustPilot.

“Working with the team at Wilkins Chimney Sweep is an absolute joy; they are such an incredibly positive, supportive network of franchisees, that it is a genuine pleasure to be able to celebrate this, their 10th anniversary with them, and to share their history in this fun and we hope, informative e-book. Even I learned something about the life of a sweep; I wish old ladies would give me a 10p tip to go and treat myself!”

“As a business the Wilkins franchisees are doing incredibly well, seeing significant growth despite Covid. We have recently welcomed three new franchisees to the network and are expecting a third more vans on the road this year than in 2020.”

“I count myself as very lucky to work with the guys at Wilkins Chimney Sweep. Our franchisees come from extremely varied backgrounds, from gym owners to chartered surveyors and from lorry drivers to policemen, but they all have one thing in common, they all wanted to regain control of their lives, spend more time with their families and be in charge of their own diaries. Some of them are happy being owner operators, whereas others are buying up multiple territories and employing staff, edging towards the management franchise model and it is a joy to see them all grow their businesses the way they want to.  Our franchisees may be sooty at the end of the day but ultimately, they’re happy. Some of their stories in the e-book really made me laugh, particularly the y-fronts one – full marks for him keeping a straight face.  I’m thrilled to be part of Wilkins’ 10th anniversary and look forward to onboarding many new franchisees over the next ten years as well.”