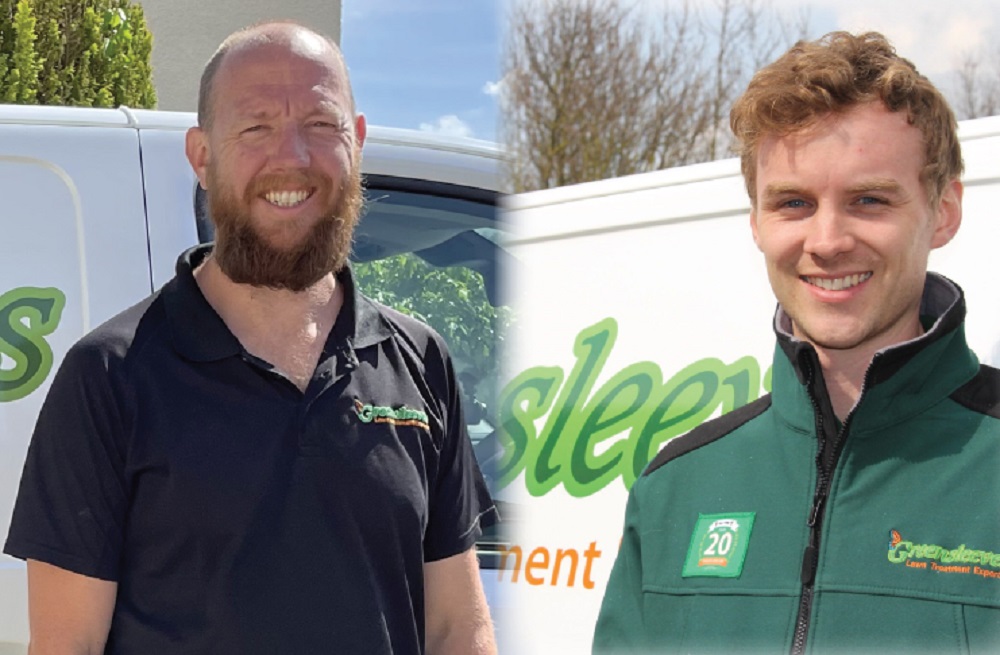 Lawn care experts, Greensleeves, announces further expansion into Scotland with the launch of two new territories. The franchise, which has more than 108 franchises throughout the UK, has now increased its presence north of the border opening businesses in Clyde Coast and West Lothian to meet growing demand for its services.

Greensleeves’s latest additions to the network brings the current total number of Scottish franchise areas to five. The two new franchises are being operated by Sam Thwaites, Clyde Coast, and Greg Truby, West Lothian. In just two months of trading, the two franchisees are already experiencing huge demand for their services, with a combined client base of over 200 customers.

Formerly a navigation officer on superyachts, Sam decided that he wanted to come home and spend more time with his family, so he looked for a complete career change. He explored several franchise opportunities before finally opting for Greensleeves. “It’s been an absolute joy working with Greensleeves so far. Since going operational in February, I’ve been busy every day with signing customers on and getting out on the lawns. Everything has fallen into place nicely,” said Sam.

“While I’m no longer working on a yacht, there are plenty of transferable skills I have been able to bring to my new role at Greensleeves. The first is my strong work ethic and the second is my ability to provide a high level of customer service. Both are essential to making any business work. Greensleeves also provided loads of great training to supplement what I didn’t know about running a gardening franchise.

“I’d say that the support from head office has been fantastic in helping me establish myself in the local community throughout my franchising journey so far. They did a leaflet drop to the people in my territory, and I have had constant communication with them since my launch. Looking towards the future, I aim to be servicing 100 customers by September,” explained Sam.

Following a recent relocation to Scotland, Greg has also flourished since the launch of his West Lothian territory, growing his customer base to over 150 people. “I decided to take on an extra territory here in Scotland because I wanted a new challenge. On reflection, when I took on my first Greensleeves territory, which was a resale, there was already an established brand and customer base in place, so I wasn’t starting from scratch. The support from head office has been great, and I am now on track to exceed my expectations by the end of the year. In fact, we are set to generate 50% more than what was estimated at the beginning of the year, which proves the demand for lawn care providers here in Scotland.”

Greensleeves has proved itself to be in high demand, with two consecutive record-breaking years for the horticultural franchise network. And as the summer weather breaks through, both enquiry levels and new customer acquisitions are set to increase.

“Expanding the business across Scotland was always an integral part of the plan so we are really excited to see our presence increase with the launch of two new franchises. The market is buoyant, and with people feeling spring is in the air, it’s proving to be a great time to invest in a franchise in the horticultural sector,” said David Truby, Managing Director at Greensleeves.

Interested and want to know more about Greensleeves Lawn Care?

The Greensleeves Lawn Care profile outlines all aspects of their franchise opportunity and allows you to contact them for further information or to ask a question.