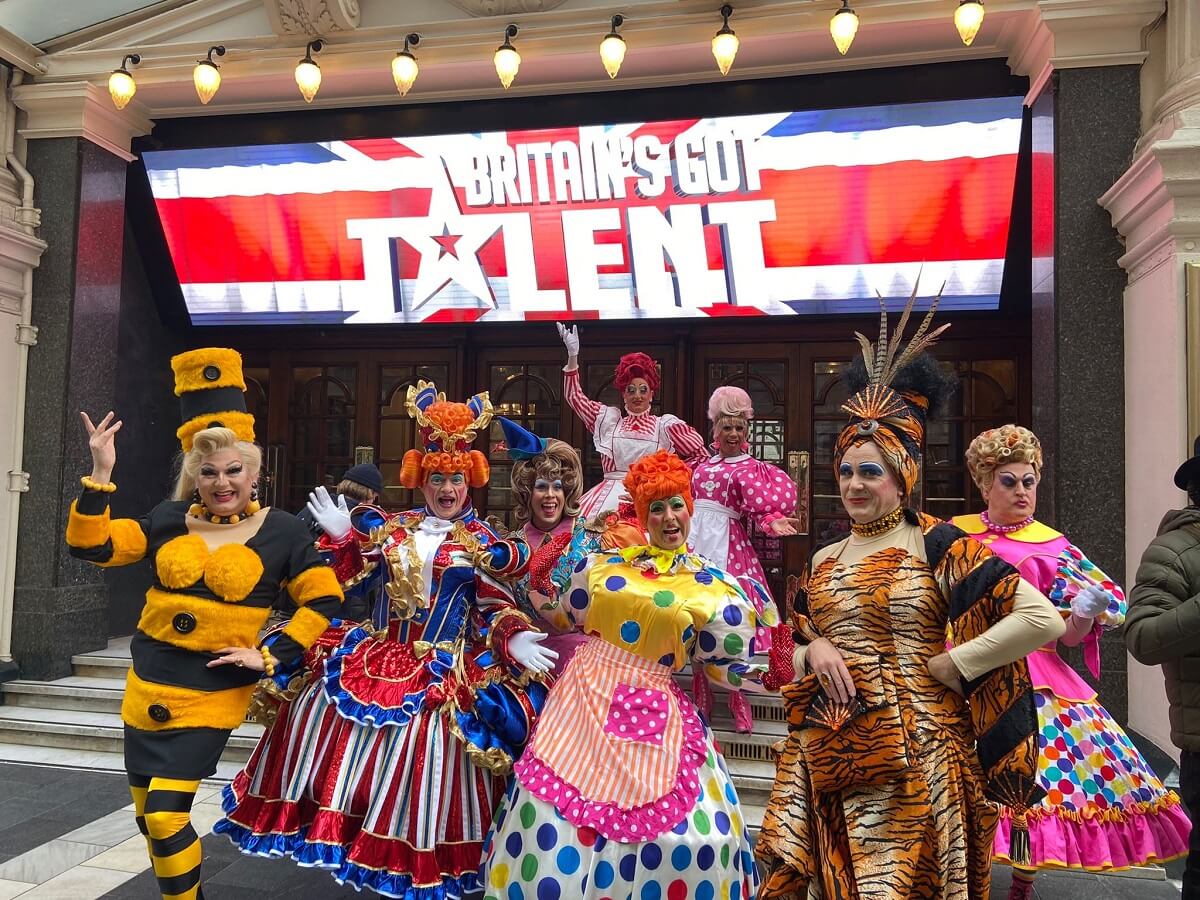 A franchise theatre school owner received four yes votes from the judges at ITV’s Britain’s Got Talent, in what must be one of the most joyful acts to grace the stage.

Marc Kelly owns the territories of Razzamataz Hackney and Razzamataz Radlett, inspiring children with his love for the theatre. Alongside this, for the last ten years, Marc transforms into Dame Dotty, performing at pantos in Grantham, Sutton, Barking and for the last eight years in Radlett.

During the pandemic, Marc reached out to other panto Dames to stay connected when theatres were closed. The result was the formation of Dame Nation, a dame super-group who recently appeared on Britain’s Got Talent and made it through the auditions with four yes votes.

Performing a mash up of It’s Raining Men and I Will Survive, Marc together with seven other Dames from across the UK, put their own unique twist on the music, changing the lyrics to reflect on their time on the hugely popular ITV talent show.

Pantomime is a wonderful British tradition and according to Marc and the other dames in Dame Nation, it is still as popular as ever, especially since lockdown. “In many cases, panto is a child’s first experience of the theatre and it’s an opportunity for them to really immerse themselves in the story,” says Marc. “As a panto dame, I love watching the children getting so involved in the story and laughing and having fun.”

Marc has had to keep his audition success under wraps from his students but knows they are going to be delighted now he is able to reveal that Dame Nation are through to the next stage.

“Razzamataz has given me a wonderful opportunity to inspire children and young people through my love of performing arts and I have seen time and time again how students gain confidence and self-belief simply by coming to our classes,” says Marc. “Razzamataz is such a supportive community and I know that all our students and families will be cheering on Dame Dotty and Dame Nation, hopefully inspiring them to believe in themselves further and never give up on their own dreams.”

The next stage is waiting to find out if Dame Nation made it through to the live semi-finals, which are due to air the week commencing May 30th.

As well as Marc performing on one of the West End’s most iconic stages, the students at Razzamataz are gearing up to make their own appearance with a performance at the Shaftesbury Theatre later in the year.

Students at Razzamataz experience a wide spectrum of performing arts styles. From traditional West End and Broadway musical theatre, through to the commercial genres of street dance, acting for camera and pop singing.

There are many performers in the Razzamataz network, all benefiting from the training and business support that being part of a franchise offers. The flexible nature of the role allows Principals to combine running their school with other opportunities and commitments, making it perfect for parents and other freelancers.

The Razzamataz profile outlines all aspects of their franchise opportunity and allows you to contact them for further information or to ask a question.