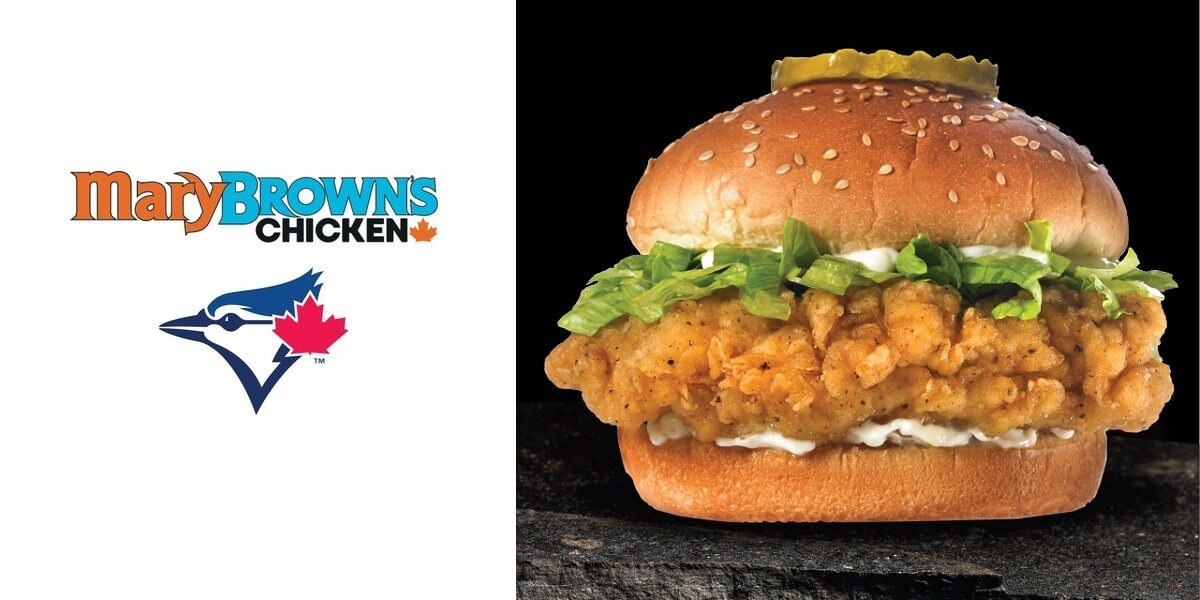 Mary Brown's Chicken, one of Canada's fastest-growing restaurant chains, announced a home run partnership with Canada's only Major League Baseball team, the Toronto Blue Jays. The union marks the start of a five-year collaboration that allows fans a delicious taste of Mary Brown's Signature favourites, including the Big Mary®, Spicy Big Mary®, the brand's latest sandwich launch, the Nashville Mary, as well as Chicken Tenders and Taters – all at the first-ever Mary Brown's Chicken concession location at Rogers Centre.

Starting Opening Night, Mary Brown's fans and soon-to-be fans will see a whole lot more of this 50+ year-old Canadian favourite. Whether it's a brand presence in the stadium or at the MB concession location – or through extensive national broadcast, digital and social media coverage – Mary Brown's Chicken is about to be everywhere, and frankly, the brand couldn't be more excited.

"Our partnership with the Toronto Blue Jays is a game-changer for our brand," notes Jeff Barlow, VP Marketing, Mary Brown's Chicken. "There are many synergies between us and the Blue Jays, including a shared history as proud Canadian organizations, a shared commitment to supporting Canadian communities, and the shared experience of spending meaningful moments with family and friends. Mary Brown's fans have a passion for baseball, and we are thrilled to be part of memories made at Rogers Centre – and with baseball fans coast-to-coast."

Rogers Centre, home of the Toronto Blue Jays and now, Canada's Best Chicken Sandwich, will be welcoming a packed house to cheer on the home team on Opening Night, something that has not been possible since 2019 due to the global pandemic. It signals a return to full capacity and to Canadian traditions – and the start of a new era for Mary Brown's.

"Mary Brown's Chicken is an incredibly successful Canadian company, and it was an easy choice to partner," says Mark Ditmars, Vice President, Corporate Partnerships, Toronto Blue Jays. "Serving delicious Mary Brown's sandwiches at Rogers Centre and bringing our brands together at franchises across Canada will benefit Blue Jays fans and Mary Brown's customers as we bring this partnership to life over the next 5 years."

With this announcement, Mary Brown's Chicken is now affiliated with both of Canada's 'national' sport teams – the Toronto Raptors through an integrated broadcast feature on Sportsnet/Big 3 of the Game and now as an Official Partner and rights holder of the Toronto Blue Jays.

"We can't think of a better way to show our Canadian pride and commitment than to connect our brand to these great Canadian sports teams," states Barlow.

Mary Brown's Chicken is also a proud supporter of BGC Canada (formerly Boys and Girls Club) alongside  Jays Care Foundation, the philanthropic arm of the Blue Jays. Over the next five seasons, Mary Brown's looks forward to deepening the level of support to BGC in harmony with Jays Care, to level the playing field for children nationwide as well as bringing exciting experiences and activations to baseball fans across the country.

Interested and want to know more about Mary Brown’s Chicken?

The Mary Brown’s Chicken profile outlines all aspects of their franchise opportunity and allows you to contact them for further information or to ask a question.