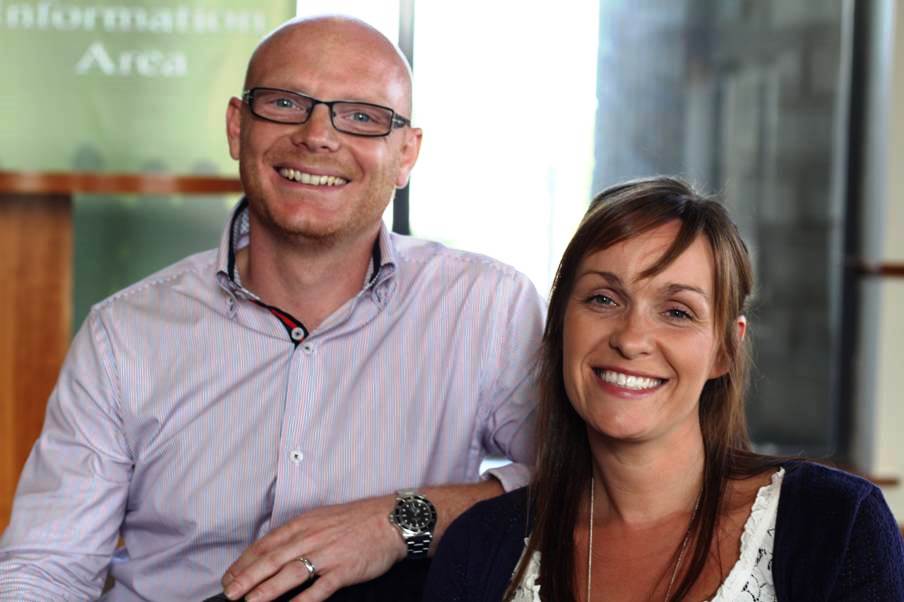 Richard and Emily Magrath are currently the biggest providers in the Caremark network. As of late 2021, they’re delivering approximately 9,000 hours of care per week – in fact, they doubled their number of hours over the height of the COVID pandemic. They have about 350 staff, around 700 clients – and have now moved to 5,000 square foot offices covering two floors, due to their growth.

Caremark Belfast and North Down is clearly a powerhouse of homecare provision. But despite all these big numbers, that’s not what drives this husband-and-wife team. For them, delivering quality care to clients – and caring for everyone around them, really – beats personal gain any day. “Your focus should be people. Profit will follow if you look after people,” advises Richard, and looking at their incredible growth, who could disagree?

One of the keystones of this people-first ethic comes from their emphasis on family. It’s been an intrinsic part of their approach, right from day one – which was many years ago, as Emily relates, when “Richard sat down beside me as I was feeding our six-month-old baby and said, ‘I think we should start a business together’. I said, ‘no’ – and he said, ‘yes’!”. After taking Emily to a Franchise Expo, he finally won her over. Nearly ten years later, they have four children, with the older ones now even starting to help with the business. They’ve cultivated a familial warmth that extends to all staff – “I know it’s cheesy,” says Emily, “but we very much have tried to create a Caremark family here”.

Naturally, the Caremark formula provided the platform for their amazing growth. Before starting with Caremark, Richard was a successful businessman – however, as he explains, “I was involved in property during the 2008 crash that a lot of people were badly burned by, so I wanted to get into something that is pretty much recession-proof, and that has a good future.” A franchise model in the homecare sector answered their needs for both stability, and the community-mindedness that the two are passionate about. Plus, with Caremark on their side, their lack of sector experience was readily dealt with. “Franchising was safer and enabled us to quickly hit the ground running. We didn't have experience of the health and social care sector, so to have a blueprint that says, ‘this is how you get started’ was great.”

Even though they met with many other homecare franchisors in this research stage, Caremark were head-and-shoulders above the rest. Others didn’t come across so well – “Yes, I'm a businessman, but just ‘money, money, money’ didn't sit well with us,” says Richard. “There was one meeting like that which lasted just 10 minutes. But then when we met with Caremark, money wasn’t really mentioned. They said, ‘We build our brand on the quality of care that we give vulnerable people in the community’. Emily and I wanted to raise the bar in the standard of care – we could see Caremark did too”.

Caremark’s Franchise Support Centre have provided a lot of support to the pair over the years – now Richard and Emily’s franchise has flourished to the point where they are able to help others in the care industry themselves. In fact, they’re promoting excellence in the sector throughout their region, with the second floor in their office mostly dedicated to a new Training Academy. They’ve also created a local Dementia Café, they’ve recruited a dedicated Wellbeing Officer for staff, and have done their own research to identify the hours of unmet caring needs in their community. Generating all this ambitious, socially positive work while raising four boys must be exhausting! As Emily says, “It's not all rosy in the beginning, it is hard work – but it's worth it” – and thankfully they are now able to take well-earned family holidays.

Outside of holidays though, when it comes to enjoying the rewards of their progress, this family-minded couple don’t keep it to themselves – they’re far keener to show gratitude to staff than to just pat each other on the back. They often bring lunch for everyone, they give staff bonuses, every office birthday is marked – “We celebrate success a lot in the office with food!” says Emily. “Those are our values – it's how we treat people,” Richard adds. “We don't ask anybody to do something that we’re not prepared to do ourselves. We treat people with courtesy – the way that we would like to be treated ourselves, I guess.”

And despite all the hard work, would you recommend becoming a Caremark franchisee? A big ‘yes’ from both – “We are making a big change in people's lives. That's what's also the bottom line is. We're making a huge impact on vulnerable people in our community – that’s my mother and my grandmother, you know? It's very, very rewarding.” To them, the importance and value of homecare can only increase. “Residential care is probably a thing of the past,” Richard suggests. “And for somebody to stay in their home, to recognise the pictures on the wall or, the carpet, the seats in the room – simple stuff like that – it's very important to people as they get older. If we can keep people in their own home, the longer the better.”

Of course, we all want to hear some words of advice from Caremark’s biggest franchise, and Richard and Emily do have some useful pointers for those starting out. The first is to plan for growth – for example, don’t let yourself get into a ‘panic recruitment process’, having let the need for a role take you by surprise. Secondly, ‘recruit for character’ – think about how someone would fit with the Caremark culture, not just their on-paper ability. As Richard says, “Ability can always be taught to a certain extent, but if someone’s character isn’t right for the team, they’re not really going to be able to learn”.

Richard and Emily are a very down-to-earth couple, and they’re 100% motivated by the good work they do. Although they’ve accomplished a vast amount, for them it’s all about gratitude rather than glory – on their amazing journey, Emily reflects, “What we have got out of it over the years, the people that we've met and the team that we've created, has been wonderful for us”. Before long they’ll hit 10,000 hours of care, and mark the 10th anniversary of their industrious, highly-motivated office. You can be sure they’ll celebrate these remarkable milestones as a family …all 350 of them.

The Caremark profile outlines all aspects of their franchise opportunity and allows you to contact them for further information or to ask a question.