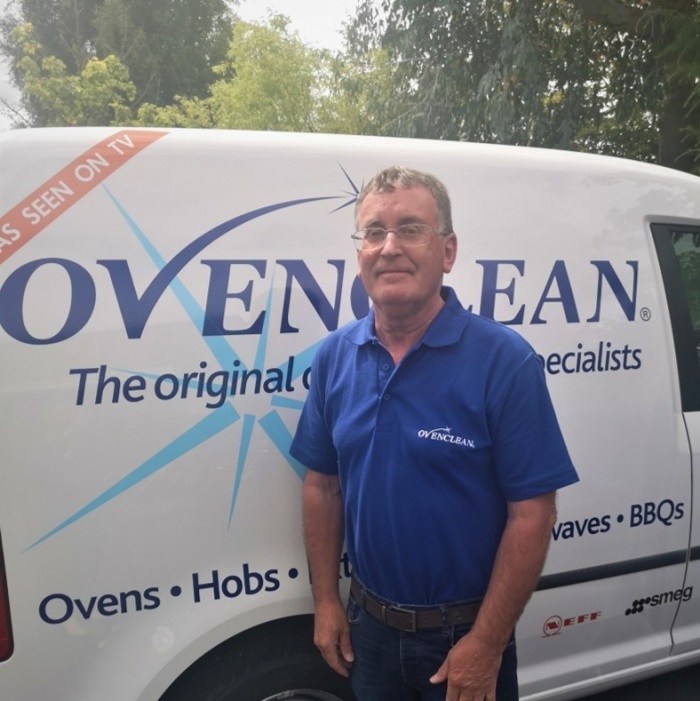 The Coronavirus pandemic saw swathes of people furloughed and, later, made redundant from their job roles. Many had been in the same career for decades and knew nothing else, so quickly had to find an alternative opportunity. For Kevin, being made redundant offered the chance to change his lifestyle and achieve greater job satisfaction, with an Ovenclean franchise.

Caught in a rut

Prior to 2020, Kevin Broadley worked as a contracts manager, carrying out commercial kitchen and restaurant fit outs for contract catering companies in the B&I, schools, university and leisure sectors. Though he had enjoyed his role for many years, something about his day-to-day duties had changed.

He said: “In the 12 months before I left my job, I started to feel that there was more to life than busting a gut working for someone else. I didn’t feel appreciated by my employer, or the clients I was working for.

“I found myself caught in a bit of a rut; though I was personally committed to doing a great job, I felt trapped, controlled and micro managed. I was travelling all over the country, working excessively long days and was very stressed out – the effects of my professional life started to impact my personal life, and prevented me playing sport at a competitive level. Something had to change.”

In April 2020, Kevin was furloughed and three months later, he was made redundant.

Rather than find a new fully employed role, which might’ve seen Kevin experience the same feelings and concerns as in his previous job, he opted to follow a different path. Knowing he wanted a job that would challenge him, and where he could interact with the public, he explored franchising and came across Ovenclean.

He said: “I knew that, with franchising, I would have to get my head around the fact I would be self-employed, but I was prepared to work hard.

“Oven cleaning might not seem a glamorous job, but I could be my own boss, make my own decisions and make a big difference to people. If I could take a job off their hands that they didn’t want to do, and make them happy with the result, I was confident I could grow a successful business.”

A new career with Ovenclean

Kevin got in touch with the Ovenclean team and having been along to a ‘find-out-more’ open day, he placed his deposit for the Ovenclean Nottingham franchise. Not currently in employment, Kevin was able to start his training programme shortly afterwards, ahead of getting to work.

He said: “There were two weeks of intensive, on the job training, working alongside an experienced franchisee who provided me a wealth of mentoring support.

“I also had direct contact with head office who offered excellent sales and marketing advice and guidance. They ensure the brand is promoted at a national level with very effective advertising campaigns, which gave me the confidence there would always be a steady flow of enquiries coming through from prospective customers. However, they also encouraged me and taught me how to build up my own network, by doing such a good job for customers that they felt compelled to recommend me to their friends and family.

“The training period and starting my franchise shortly afterwards took a bit of adjustment. I wasn’t used to working physically and intensely for sustained periods of time due to being furloughed, but I soon built up my stamina and fitness. One unexpected benefit of the job is that I’ve lost weight, I’m fitter and I’m healthier.”

Migrating from employment to franchising requires a change in mentality, along with the typical challenges of running your own business. But Kevin has approached any hurdles head on, using them as an opportunity to learn.

He said: “I had a few challenging days in my early weeks, where things didn’t go quite according to plan. But I was always able to call on my mentor and the wider Ovenclean support network, who helped me through every obstacle.

“Within a few weeks, I really started to notice the benefits of owning a franchise. I have the flexibility to choose what I do on a daily basis, and don’t have to answer to anyone. I have job satisfaction every single day, because customers recognise I’ve done a great job and it means a lot to them and to me. I feel so proud of what I’ve achieved in such a short space of time and know there are more great things to come.”

Kevin is several months into his new franchise and is enjoying being in control of his own destiny. His redundancy was a twist of fate which encouraged him to take a new career path, but he encourages anyone who isn’t happy in their job to consider self-employment and franchising.

He said: “This is such a simple business; do a good job and your customer will have you back on a regular basis to do a job they hate. They’re happy to pay you to do it, and happy to pass on a good word, too.

“You meet all sorts of people working in this role, and I love the opportunity to engage with the public. Some want to talk to you the whole way through the job, others prefer to let you get on with it. But every single person I’ve come across has been lovely and easy to get on with.

“I’d recommend franchising to anyone. Take a leap of faith and don’t look back – the rewards are so worth it. Be prepared to work hard, because you only get out of it what you put in. But I can honestly say I am so much happier, relaxed and content than I ever was when working for someone else. I have a sense of purpose and no sense of stress. Working for Ovenclean is a breath of fresh air.”