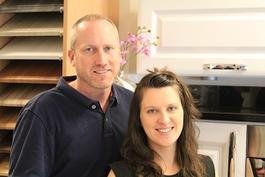 SEAN and Katie Hebdon tried to find a good reason not to join Dream Doors – and when they couldn’t, they bought a franchise.

As with all of Dream Doors’ new franchisees, the couple did diligent research before making a commitment just over seven years ago.

For Sean, the clincher was taking some impartial advice from his bank manager.

Sean said: “I was looking into franchising and had found a Dream Doors advert online.

“I kind of kept coming back to it, so I thought: ‘Okay – let’s try to find something negative about it.’

“I couldn’t find anything and then - completely unrelated to my franchising research - I happened to have a meeting with my bank manager, so I asked him about Dream Doors and if he had any account holders on his books.

“Of course, he didn’t reveal anything that he shouldn’t have, but he did confirm that he was familiar with the accounts of several Dream Doors’ franchisees and he indicated that they were all very healthy.

“I took that as a good indicator and set up our first meeting with Dream Doors – the rest is history.”

Prior to signing a franchise agreement with Dream Doors, Sean had been a branch manager for a builders’ merchant - a trade he had been working in since leaving sixth form college.

Katie, who previously worked in HR for 12 years, had just finished an 18-month period of maternity leave and was also ready to take on a new venture.

“It was important to Sean that he worked for himself in his next role, so we decided to take this opportunity when it came up.

“We were both aware that many small businesses fail in the first year, so we wanted something with a proven business model that we could latch onto.

“Franchising was the logical way to go for us.”

Launching at the beginning of 2012, Sean and Katie quickly built a successful, family-run business that delivers the lifestyle they had always craved. In fact, two years ago, they were able to buy the home of their dreams using the profits generated by their Dream Doors franchise.

Dream Doors, the UK’s #1 kitchen makeover company, is looking for more talented franchisees like Sean and Katie who are ready to generate huge profits by representing an industry-leading brand.

With 91 showrooms open in the UK, there are just 19 new franchise territories available nationwide, particularly in the North East, North West, Yorkshire and Scotland.

Interested and want to know more about Dream Doors?

The Dream Doors profile outlines all aspects of their franchise opportunity and allows you to contact them for further information or to ask a question.