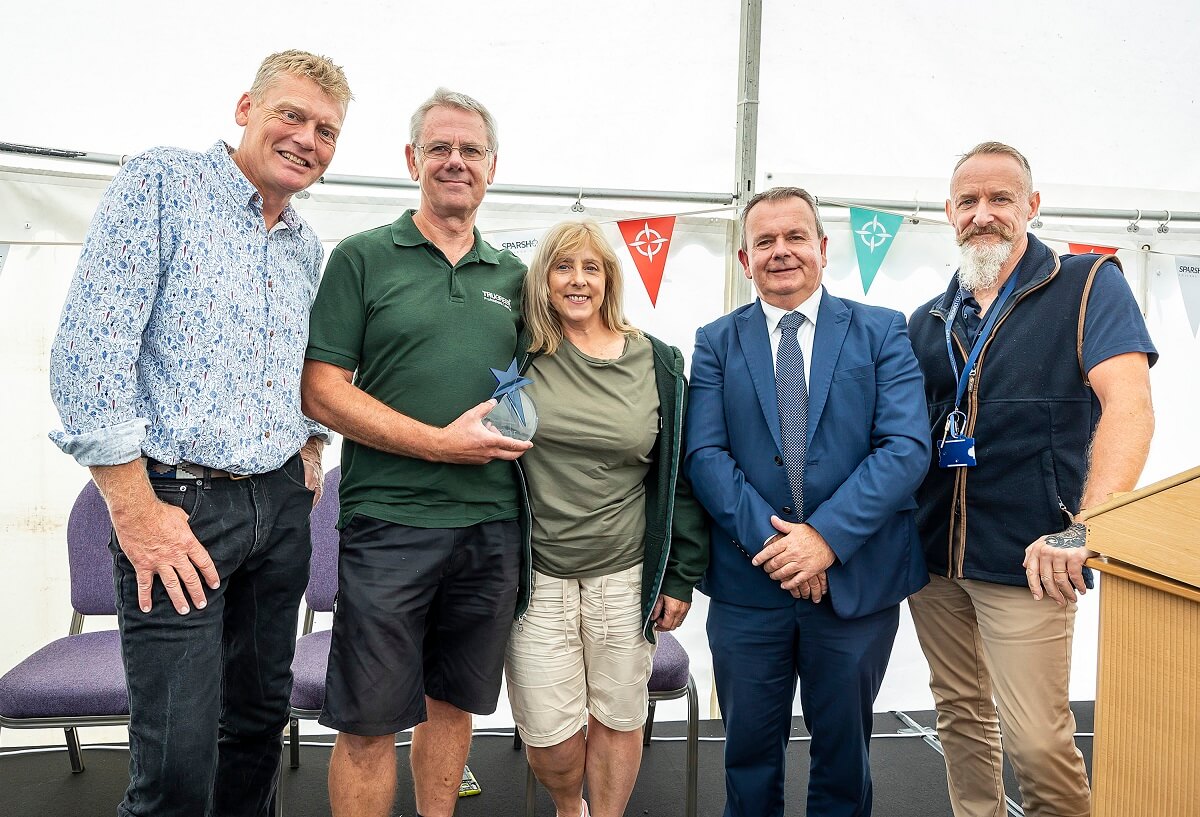 Following on from their win as the recipients of the TruGreen Marketing Rookie of the Year Award earlier this year, Alwyn and Sandra Rees from TruGreen Hampshire South & New Forest have earned yet another prestigious accolade. This time it comes in the form of the Employer Mentor Award, which was given to Alwyn and Sandra by Sparsholt College as recognition for their work mentoring one of its students.

Tom Page from ServiceMaster Brands UK sat down with Sandra to chat about the award and her and Alwyn’s experience mentoring their student apprentice in all things lawn care.

Sparsholt College, Sandra says, is well-known nationwide for its work as a prestigious agricultural college. Local to the area themselves, this meant Alwyn and Sandra knew about the kind of work that Sparsholt does, particularly its programmes that integrate students with appropriate local businesses.

Sandra and Alwyn were keen to participate in a partnership that would allow students to bring their experience and knowledge of horticulture and agriculture to the lawn care industry and put their education into practice by helping members of the local community with their gardens. Sandra says that although the focus of what they do at TruGreen is providing the best possible lawn care to their customers nationwide, customers naturally often want to talk about other elements of gardening such as their shrubs, and having a student there to provide expertise in this area would be a big help to both the TruGreen Hampshire South and New Forest team and their customers.

In September 2021, Sparsholt paired Alwyn and Sandra with Josh Newman, a Level 2 horticulture student in the sixth form. Initially, Alwyn and Sandra met with Josh to see if he would be a good fit for the business and work out travel arrangements and got everything sorted for Josh to work at TruGreen Hampshire South for that academic year.

Josh’s studies and his work with TruGreen were aided by his keen interest in horticulture, down to the finer details of the subject. Sandra says it was a pleasure to work alongside someone so engaged in what they were doing, and that the education during Josh’s placement became a two-way street as he was able to teach her and Alwyn the Latin names for many of the plants in customer’s gardens! She says the extra pair of hands was also greatly appreciated, as Josh was able to help in all aspects of the jobs, from raking lawns, to loading vans and carrying out the various processes required to renovate and keep a lawn in tip-top condition.

The concern that had been present from both Josh and the college ahead of his placement was how confident he would be in engaging with customers. But by the end of the year, Josh had excelled, surprising even himself and gaining confidence in his abilities. This meant that by the time it came to the end of his placement and Josh sat his exams, he felt far more confident, helping him to pass his exams and move on to the next stage of his development – something he wasn’t confident that he would achieve at the start of the year. According to Sparsholt, Josh left the placement a more confident and capable individual, and the work with TruGreen helped him prove to himself that doubts that he had which he feared may bar him from achievements in his career and life, were not founded.

With Josh now taking his next steps, Alwyn and Sandra are keen to make their partnership with Sparsholt a TruGreen Hampshire South annual tradition and have expressed interest in taking on two new students this year.

Alwyn and Sandra thought their work with Sparsholt was done for 2022. So, they were surprised to be contacted by the college and asked to attend its first-ever ‘Employer Thank You’ event for all the local employers who had taken on work-placement students during the last academic year. This saw two other employers receive awards for their contributions, but Alwyn and Sandra say they were shocked to receive the Employer Mentor award. Sparsholt however, saw it as a no-brainer, recognising them for the incredible 150+ hours they spent working with Josh throughout the year and the leaps and bounds he has come on as a result.

Suzanne Grant, Deputy Principal at Sparsholt said “We support around 4,500 learners each year across a full land-based and general further education curriculum. The employers are such an important part of the Sparsholt College Group community. We know that we cannot possibly do that without [our employer’s] help. It has been long said that there is a gap between the delivery of educators and the needs of the industry. With [the employer’s] help, we work together every day to bridge that gap.”

Creating partnerships like this is an excellent opportunity for businesses like TruGreen Hampshire South and New Forest to engage in their communities and build new relationships. Not only do Alwyn and Sandra now have a strong relationship with Sparsholt College, but during the period of their placement, they were able to put the Sparsholt Logo on their website. This adds that extra bit of prestige to their local image and brand as many in the local area know and trust Sparsholt as a respected and reputable organisation – particularly in the field of agriculture.

Want to grow your own business and community?

If you would like to grow and develop your very own thriving lawn care business, get in touch with the ServiceMaster Brands UK Franchise Sales team today to learn about available TruGreen territories near you. With TruGreen professional lawn care, you can build a thriving business that allows you to move out of the office and into the great outdoors, backed by the support of their franchise support staff and an internationally celebrated lawn care brand. With over 30 years as a top lawn care franchisor in the UK, you have the unique opportunity to follow a business model that has proven to work in the UK and across the pond. TruGreen is looking for committed and driven individuals who love the outdoors and want to make a difference to the lives and lawns of members of their local community to join its celebrated franchise network.

By booking a discovery session today, you take the first step on your journey towards a new career that lets you be in business for yourself but not by yourself. No level of prior industry experience is needed to build a thriving TruGreen business, so whatever your knowledge of lawn care, what matters is the passion you have for what you do and the people you serve. With the backing of ServiceMaster Brands UK, you’ll receive a comprehensive training academy and starter pack to give you everything you need to hit the ground running, as well as ongoing and specialist support from our franchise support centre during your time with us to aid with everything from marketing to training, recruitment, PR, social media and more.