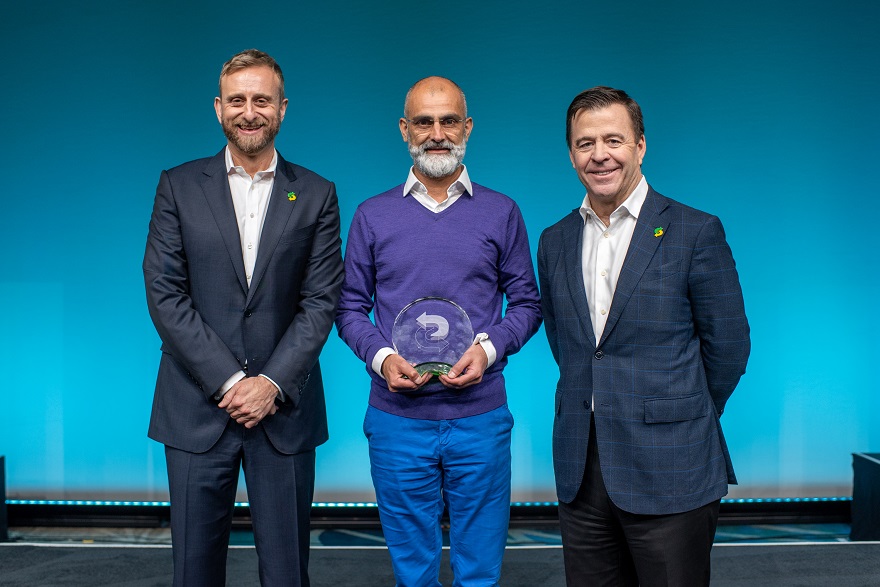 Daljit Nahil, a Subway franchise owner based in Coventry, was presented with an Outstanding Community Partner Award at the annual Subway Leadership Conference in Orlando, Florida last week, as part of its internal awards ceremony. The award was in recognition of the highly successful Healthy Eating Schools programme Daljit has been running in the local area for the past 15 years.

The Healthy Eating Schools programme, which encourages primary school aged children to take an interest in learning about nutrition and food groups, was recognised for the impact it has on an average of 3,000 local students each year. Since Daljit began the programme 15 years ago, it has reached an estimated 45,000 children across Coventry and become a key aspect of the curriculum in many local schools. Subway is always keen to celebrate and encourage franchise owners engaging with and supporting the local community.

Through the community initiative, primary school children are given the opportunity to create their own Subs, either when a franchise owner is invited into the classroom or by visiting a local store. Over the years, this hands-on approach has proven to be a fun and effective way of supporting the national curriculum in teaching children about healthy eating. Building the Subs encourages pupils to think about what ingredients make up their food and the importance of choosing a balanced diet. Subway’s key message of letting people choose what goes into their Sub, alongside an emphasis on nutrition, makes Subway an ideal platform for teaching balanced eating.

As well as being a franchise owner, Daljit Nahil is also one of Subway’s Business Development Agents (BDA). Often franchise owners themselves, BDAs have specific experience in opening and developing Subway franchises and offer support and assistance to franchise owners with everything from site selection, leasing, operations and much more. They work to promote Subway brand values, such as giving back to the local community, which has long been an important part of the Subway DNA.

“Our BDA community plays an essential role in fostering the growth of our valued network of franchise owners across the globe,” said CEO John Chidsey. “I am proud of our each of our distinguished BDA honorees and grateful for their commitment to building our regional footprint and creating unmatched guest experiences.”

Through his role as a BDA, Daljit has encouraged numerous other local franchise owners across Coventry to get involved in the Healthy Eating Schools initiative. He has now created a network of over 10 franchise owners who visit nearby schools and meet with community groups, such as local Scout troops, regularly. Through this campaign, Subway is encouraging healthy eating and building relationships between businesses and local people.

Speaking about winning a Community Engagement award, Daljit Nahil, Subway franchise owner and Business Development Agent, said: ‘It’s great that Subway has recognised my Healthy Eating Schools programme and the impact that it has had, and continues to have, on the local community. Community is at the heart of Subway – all of the stores are owned and operated by entrepreneurs who are part of or want to contribute to their local economy, and I’m very proud to have been recognised as a part of that.”

“I hope that this award will encourage other franchise owners to get involved in a community initiative or start one of their own. I am thrilled that many of my fellow franchise owners have become part of the Healthy Eating Schools programme in Coventry over the years and I would like to thank them for their support and participation. I believe that by us all working together, we can achieve a lot more within the local community and have a really positive impact.”