Subway store opens at University of the West of England 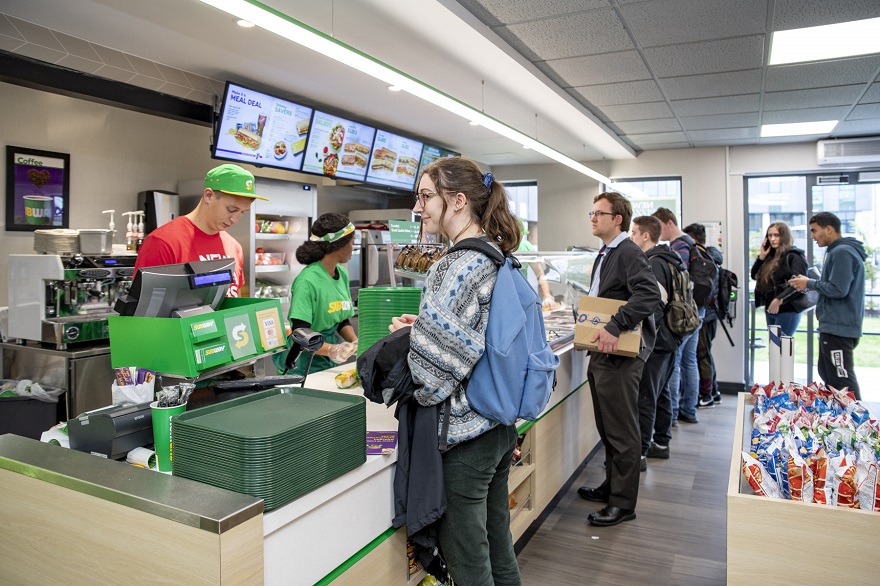 A new Subway store has opened at the University of the West of England (UWE Bristol) in Bristol.

Located in Q block on the Frenchay Campus, the new store offers students, lecturers and visitors access to a menu of freshly prepared Subs, wraps and Salads, all customised to each guest’s preference. Conveniently situated near the visitor car park, the store will also attract passing footfall traffic.

Its opening has created six new jobs, providing new employment opportunities for the local community, as well as for its student population. Two of the six jobs are term-time only, while a range of shifts have been created to allow students to work alongside their studies, particularly during lunchtime periods and out of studying hours.

The new store underpins Subway’s commitment to providing nutritious, fresh and convenient food options in non-traditional locations, such as universities. There are now more than 25 Subway stores open at education establishments in the UK and Ireland, with stores already open at universities and colleges including the University of Hertfordshire, Cardiff and Vale College and Northumbria University.

Colin Hughes, Country Director for Subway UK and Ireland, commented: “We are delighted to see the opening of a Subway store at UWE Bristol. As a company, we’re committed to serving nutritious food options that offer variety and value, which we know are very important factors to students. Students, lecturers and visitors to the university will now be able to enjoy our ever-evolving menu, such as our 21 new and improved ingredients, which includes Gluten Free Bread, Sun Blush tomatoes, diced beetroot, crispy onions and our new flavour station offering wide-ranging choice and delicious food options throughout the day.”

UWE Bristol sought a high street brand that would appeal to its students and keep them on-site, while providing a relaxed atmosphere where they could purchase food they were used to buying before starting at university. Subway was a top choice, ticking all the boxes for UWE Bristol.

Kristian Fernandez-Mitchell, Business Improvement Manager at the University of the West of England, explained: “Following student survey feedback, we realised that improving the university’s food offering was key to giving our students a great experience on campus. We wanted to create a destination and high street brands appeared to be key to giving students what they want. Ultimately, big brands are what students want and with Subway being in the top three for student choice, it was evident that Subway was a winning choice for students here at UWE Bristol.

“We are really excited to bring this popular high street offer to UWE Bristol students, and we hope the students enjoy the fast service and wide range of options that Subway offers.”

Subway now has more than 800 stores in non-traditional locations in the UK and Ireland, including hospitals, transport hubs, universities and colleges, petrol forecourts and convenience stores.

With more than 2,500 Subway stores open across the UK and Ireland and over 43,000 stores in over 110 countries, Subway is the world’s largest sandwich franchise.