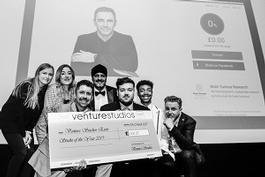 Venture Studios celebrated its 21st birthday in style this year in an exciting awards ceremony held at the National Science and Media Museum in Bradford.

Venture is the UK’s largest portrait photographers and operates in the UK and also in the USA and Hong Kong. Every year, it holds a prestigious awards ceremony celebrating all the talent from its 21 studios. The awards include recognising talent in every area of the franchise model and culminates in the big two awards, Photographer of the Year and Studio of the Year.

The event started in the venue’s amazing Kodak gallery which chronicles the history of popular photography. It was a perfect location to mark how far the art of photography has developed to the incredible standard shown by all of Venture’s photographers. The awards themselves were held in the Pictureville Cinema and the excitement was palpable as the tension mounted.

The awards started with the commercial awards, which proved how Venture’s business model, combining world-class customer service, market-leading standards of photography and a unique and contemporary range of products, continue to create highly successful and viable franchise businesses. The highly anticipated Studio of the Year Award was won by Venture Eton for the 5th time! Eton, owned by Franchisee Jonny Foster, continues to excel both in its photography and in its commercial acumen, creating an outstanding business year on year.

However, it is the art of photography that is at the heart of Venture, and the photography awards showed once again how the company’s creative talent is truly the best in the business. The new 2019 image bank is as exciting as it’s ever been and shows a standard of photography across the company that continues to break boundaries in the market.

The photography was this year adjudicated by a notable group of judges who have their own expertise not only in photography, but in design and fine art. They were highly acclaimed international photographer Stuart Hall, Hasselblad master and fellow of the British Institute of Professional Photography Bryn Griffiths, fine art expert Chris Westbrook and international interior designer Pranvera Vula. The judges were all massively impressed by the extraordinary standard of the photography from all studios.

The awards culminated in the Photographer of the Year award which this year went to Abbie Townsend of Venture Greenwich in the US. Abbie continues to create some of the most stunning images across the brand and was thrilled to be in the UK to collect her prestigious award on the night.

The annual awards are the culmination of a massive amount of hard work by Venture Studios as a franchisor. The ongoing training and support given to the studios continues to push their creative and commercial boundaries to create excellent businesses. Venture is the only nationally recognised brand in its sector, making it truly distinct as a franchise concept and the company is always looking for new franchisees who would like to join this exciting creative business, regardless of their career background. If you are interested in becoming a Venture franchisee and would like to be part of next year’s awards ceremony then get in touch. Venture would love to hear from you.