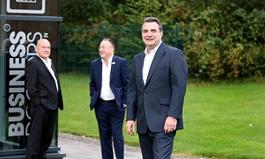 Business Doctors, the SME support franchise, has launched a new rural territory to cover the Lakes and Dales.

Describing its offer as 'somewhere in between consultancy and coaching', the fran-chisor provides hands on support to owners of small and medium sized companies in every sector.

The Lakes and Dales territory has been bought by former FMCG director Steve Howard.

With a range of expertise from general management, to operations, supply chain, logistics, production and sales and marketing, Steve will now use his skills and experience to help the owners of the region's small and medium sized firms realise their ambitions.

The self-confessed business junkie said: "I just enjoy business. I love doing busi-ness, talking to people about business and I read all the business press in my spare time. It's what interests and motivates me".

"Part of being a business junkie," he said, "is having my finger on the pulse. I can bring both intelligent, practical ideas and implementation strategy to small and medium sized businesses, operating as a hands on team member rather than a consultant.

"I am all too aware of the expression 'consultants steal your watch and then tell you the time'.

"This couldn't be further from my approach."

"As part of the Business Doctors network, I work with and alongside the owners of SMEs to help them to develop and grow their business. With me it's definitely not about telling: it's all about doing".

Since humble beginnings above a Cheshire takeaway in 2004, franchisors Rod Davies and Matt Levington were set on building the go to brand for SME advisory and consultancy services.

With over 30 Business Doctors territories now operating around the UK, the ambi-tious pair took their first steps beyond British soil when they launched in South Afri-ca in May 2014. Today, Business Doctors' territories are up and running in eight re-gions of the country, including Johannesburg, its largest and wealthiest city. In 2016, Business Doctors launched in India, Malta and Republic of Ireland and in 2017 they appointed a master franchisor for Belgium and the Netherlands.

Rod Davies, Business Doctors' co-founder, said: "I am confident that Steve will be able to use his experience to transform the fortunes of SMEs around the beautiful Lakes and Dales.

"He shares my belief that entrepreneurs need hands on, practical support and not just consultancy. Business Doctors offers an affordable and jargon free middle ground between coaching and consultancy and Steve is well placed to deliver this service to an exceptional standard."