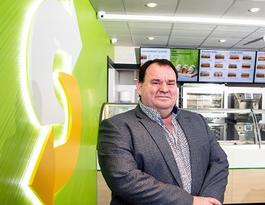 Born and brought up in New Zealand, Damian moved to the UK in 1980.  He has a background in the catering and hospitality sector, after working for Compass Group for five years as a Hospitality Manager at Stormont - Northern Irelands Parliament, and 10 years with P&O as its Hotel Services Manager, Irish Sea.

Damian employs 48 staff across the six stores, but remains very hands-on and involved as much as possible at all his stores, ensuring that excellent customer service is the top priority of all his staff.

When Damian was looking for a new challenge in his career, he turned to Subway, and began working as a Business Consultant for the Business Development Office based in Belfast.  Soon after, he purchased his first store in Antrim Town and hasn’t looked back since.

Damian said: “I was very aware of how popular Subway was, even before I began working for the Business Development Team. It’s a great concept which is well known across the world and has popular global support.

“When the opportunity came about for me to buy my own store, I felt it was a dream come true! I’ve always been a big fan of Subway and I love its products, so to be able to become a part of that brand was very exciting.”

“I liked the structure and support of working in a franchise, the tried-and-tested business opportunity, but with the chance to make your own mark, have your own stores and make your own connections.  There’s nothing that can’t be achieved with Subway’s business model, it’s so versatile – proven by the fact I’ve just opened Northern Irelands first Drive-thru store.”

In 2017, Subway introduced a new Fresh Forward store design, offering guests an enhanced modern Subway experience, with clean lines and customer focused touches. Damian’s Drive-Thru store is his first Fresh Forward store, and both guests and staff have been impressed with the new design.

“The comfort and space in the Fresh Forward store is great, some people will even use the Drive-Thru, and then come into the store. The feedback verbally and on social media has been overwhelmingly positive and the support from subway to get the Drive-Thru up and running was first class.

Before opening his Fresh forward Drive-thru store, Damian closed a Subway store on the same development. There was about 12 months between one store closing, and the other opening, but thankfully the desire for a Sub never faded.

Damian explained: “What has been really reassuring is that guests from the old store near the Drive-Thru site have come straight back to us. We have been missing from the area for over a year after the store closed, but our guests are so loyal, and there has also been a lot of people keen to use the Drive-Thru.”

Damian is very involved in community activities around his local stores, and with the wider Subway brand.  He sits on the regional Franchise Advertising Fund (FAF) board in Northern Ireland, which makes decisions about regional marketing activity, as well as region-specific promotions, offers and other activity.

He says: “There’s lots of opportunities for franchise owners to get involved in the brand, on a local, regional and national level, and I think it’s important that we do – after all, each Subway franchise is individually owned and operated, so it’s our businesses, and our communities that are directly benefiting.”

Damian has fostered a close relationship with local ice hockey team, Belfast Giants, on behalf of the regional FAF board. For him the marketing opportunities are strengthened further, once one well-known brand is associated with another.  As a sponsor of the Giants, Subway often takes part in promotional activities at home games, including the legendary Sub Cannon – which fires footlong Subs into the crowd at half-time, something that Damian says really gets the crowd going!

“Sponsorship of the Giants has opened up a new customer base for Subway across Northern Ireland,” says Damian.  “You get lots of families going to the Giants’ games, many of them perhaps weren’t familiar with the brand beforehand, but now they know and have had the opportunity to try Subs for themselves, they might even be fans of the brand for life!”

Damian firmly believes that the franchise model is perfect for those who are considering starting their own business, because there is as much guidance and support as you need, which provides extra security when starting out on your own. The Business Development Office is always there to help out, whether it’s on the ground support at the opening of a new store, or on the phone for advice and guidance.

“My advice to anyone who is thinking of opening their own franchise is to make sure you have the passion for the product, whatever that may be, if you believe in it and enjoy it, it will make it much easier for your staff and guests to enjoy too.

“The same approach goes for recruiting and training the right staff, when your staff engage and are well trained, you’ll have a better team and well trained staff are good for business.  Staff engaging with customers is key, this is the vital link – and what makes guests keep coming back.  My staff get to know the regular guests, they talk to them, they find out about their day – and of course will know their favourite Sub!  It’s this kind of approach and attention to detail which can often make the difference between the guest having a good experience in store, and an excellent one.”

However, underpinning everything for Damian is Subway and its products, they remain his passion and drive. “I believe that there is a real need for healthier choices for people, whether they’re in a shopping centre, visiting hospitals, looking for a lunchtime bite to eat close to the office or out with the family.  The great thing about the range of Subway products is that there’s something for everyone, if you want a healthier option, there’s the Low Fat range, if you’d like something a little more indulgent that’s fine, if you’re looking for a value for money lunch, there’s the £3 Real Deal – and of course, there’s the ‘Kids Pak™’ – it really is a brand for all the family, and one that will always have a special place in my heart.”

Find out more about a Subway Franchise Opportunity